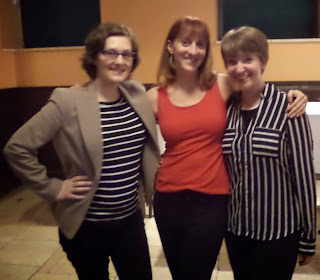 The walls in the back room at Jak's are painted apricot, contrasting the dark brown paneling. The very basic metal-pedestal tables are covered with long white tablecloths, and the floor's whitish tiles have seen better days. A cracked mirror ball hangs above it all, perhaps a survivor from one of the previous century's original discos. The decor at Jak's might be charmingly outdated, but the food and drinks are both carefully prepared and low-priced, and the management has always welcomed writers, letting them hold events for a nominal fee or no fee at all.

It's the first Monday of the cruelest month, and the University of Illinois at Chicago's Department of English is hosting a reading to celebrate the fact that three of its recent or soon-to-be graduates appear in the anthology Wreckage of Reason II: Back to the Drawing Board (WoR2): Brooke Wonders, Lyndee Yamshon, and Snezana Zabic (yours truly). To make the coincidence stranger, our professor Cris Mazza and our classmate Megan Milks appear in the first installment of Wreckage of Reason. In fact when I submitted, I assumed I would not get picked because I figured (on top of all the regular contingencies), what are the odds?

It's a bit past 6 PM, and our classmates, professors, and friends fill the room. Due to the tight schedule of the Program for Writers Reading Series, the reading takes place as planned, even though the anthology has not officially come out; this is actually my first time hearing Brooke's and Lyndee's WoR2 pieces. I do know from our past encounters that the three of us share a tendency to play with genres and resist easy classification as either fiction or nonfiction writers. Our evening's MC, poet Tyler Mills, has us go in the alphabetical order, our last names squished right there at the end of the alphabet, missing only an X.

First, Brooke reads her completely fictional short story titled "Memoir," a fable starring a talking, living book and her owner Lucy. "The Book" not only self-records the owner's most embarrassing moments, but also passes itself down the matrilineal line generation after generation against the recipients' will.

Next, Lyndee regales us with "Frankly Fucked Up In E-Town," a humorous snapshot of an unemployed drama school graduate forced to move back into her old room in her overbearing parents' upper-middle-class home in Evanston, IL. The audience relates immediately, because we all know what it means to be infantilized by our parents as we and they age, regardless of the economic and geographic circumstance.

So, we've got a fable and a satire. What else is missing? A haibun, of course. My piece, "Failing Haibun" grabs the Medieval Japanese form and stretches it to fit an episodic narrative that travels from a humble tube radio in a kitchen in Yugoslavia in 1979, to a transatlantic plane stranded in Brest, France in 2001, with the 1990s Yugoslav Wars squeezed in between.

Afterward, Tyler delivers a few parting words, this being the last reading of the Series for 2013/2014. It's Brooke's birthday, so we sing, and then the crowd slowly migrates to Jak's main room and beyond.

As I write this, I wonder about the subtitle of the anthology and the effect it has: An Anthology of Contemporary Xxperimental Women Writers. Is there something inherent in our gender that makes our writing experimental? Of course not, and the term "xxperimental" is purely tongue-in-cheek, lest anyone think all this comes from some essentialist impulses. Rather this anthology is a political statement.

Just a final thought--in the past two decades, on both sides of the Atlantic, the only spaces that were open to me as a writer were the "innovative," "experimental," "non-commercial," "non-marketable" ones. And yet, my writing is quite accessible, as is Brooke's and Lyndee's and, I have no doubt, our fellow anthology contributors' work. Yes, we play with form and language, but all in the service of crafting compelling writing for a broad literary audience tired of formulaic prose. So what gives? Do the politics of patriarchy, racism, and capitalism collude or collide? And how do writers fight? Well, to be continued...

Meanwhile, keep up with all the contributors' adventures on the WoR2 superblog!
Posted by Snezana Zabic at 2:46 PM

Congrats on the publication! Keep on fighting! and wearing stripped tops (I'm wearing one as I type)

Clem, you know it! Sometimes I think writers are too polite about their politics or they try to separate their activism from their art. I'm for mixing it all up, shaking and stirring, from the lab to the street and back.