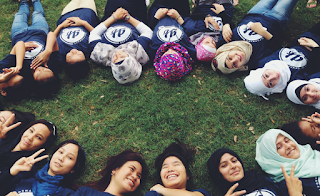 I was once a girl refugee. Eventually, things turned out fine for me because I had support from my family, friends, teachers, and mentors. As I was transitioning to adulthood, I had cousins who were also refugees and who were 10 and 11 years younger than me, and I helped them out too. Of course, in that shitty last decade of the 20th century in former Yugoslavia, we were all too busy with daily survival to realize we were mentoring and were being mentored.

It's only in retrospect that I realize that's what Mike Watt was doing by corresponding with my brother and me from 1991 on. He mentored us from afar, just by reading and responding to our letters. He's the one who always says "start your own band," which I took both metaphorically and literally.

My college professors were just doing their job, you could say, but Dusan Kvapil in particular made sure I had all the opportunities possible to thrive as a student. I never got to thank him. Even before I knew him, I was watching Czech movies with his subtitles, which lead me to read Bohumil Hrabal, which lead me to enroll in Czech Studies at the Philological Faculty of the University of Belgrade.

Belgrade's Women's Studies Center was an oasis for a lot of us, refugees or not. Dubravka Djuric, Jasmina Tesanovic, and Jasmina Lukic gave me books to read and resources beyond what they signed up for in the first place when they agreed to teach a few classes in a converted apartment in the Dorcol neighborhood. I ended up at the Central European University in Budapest, which determined the shape of things for me as an adult in many ways.

This is all to say: there's a benefit coming up, sponsored by Packingtown Review, and featuring my band Rent Party. Rock for Refugees will raise funds for GirlForward, "a community of support dedicated to creating and enhancing opportunities for girls who have been displaced by conflict and persecution." Help spread the word, and come out if you can.

Posted by Snezana Zabic at 9:24 AM No comments: