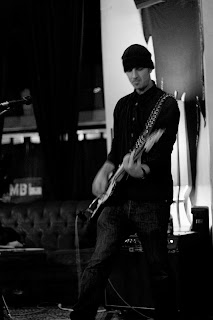 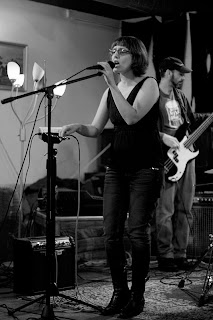 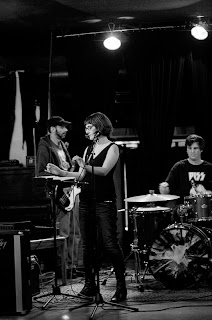 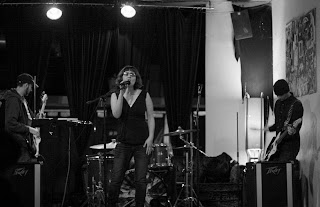 First, if Good Apples didn’t exist, I’d pretty much dream of there being a band like that, whether or not I was in it. Awesome no-nonsense songs (lyrics are sometimes a kind of no-nonsense nonsense… if that makes sense), varied material, sludgy, raw, fun sound, a DIY approach to everything. I’d either be in that band, or go to all their shows.

Second, I’ve been writing my blog entries for the past year as if I were a rock journalist who happens to be in the band she almost exclusively writes about. But now there are bloggers who, completely independently of us, support Good Apples. Check out SouthSide.

Third, I might try some different approaches to writing about the band next year.

Bob Rok organized the first out of hopefully many crossover gigs, as there should really be many more club shows where you can see great indie hip hop and rock (so, outside of a festival setting). The two genres have much more in common than not, we’re in the same social circle, and we have nothing to lose by joining forces. The issue on 11/22, however, was that no DJs could show up, so it was left to two solo MCs, Bob Rok and Mega, to represent. And they did!

Good Apples played a (for us) quieter set, to accommodate the limits of the small bar in a residential area. The guy there, like Esmeralda and Kevin, were very hospitable, and Esmeralda did a really good job with the sound to boot. We opened with “Gem,” and we also did “West Wind,” “Happy Ending,” “007 BC,” “Dream,” “Used to Sing,” “She Crashed My Car,” “Mountain Killer,” and “Once Is Enough.” Maybe I’m forgetting something, but we did them all with a kind of slightly subdued but intense energy, beautiful at moments, but (as at ease as we were) somehow serious and a little stern, atypical for us. At least that was my feeling afterward. I’m glad we ended the set with the very upbeat “Once Is Enough,” it was a welcome bright coda to the set.

Once again, the Hungry Brain people and their welcoming vibe really make me want to come back to the venue, preferably on a weekend night.

Pete and Gabor, and possibly Dillon as well, have played the Elbo Room before in their prior bands, but it was a first for me. Again, friendly staff, a hospitable atmosphere, and even the gentleman repairing the heating glitch was in a good mood, joking around with us (he said my Theremin was crying for its mommy, for example). The heat did get fixed, but on a witch’s tit cold night, the venue was sparsely attended. There was in fact no one in the upstairs lounge were a pretty awesome acoustic trio was doing a jazzy folk set. A few people gathered by the time our set was about to start, after a solid set by the Canadian troubadour Mark Perak.

When we launched into “She Crashed My Car,” we indeed stepped on it—the song moved faster than ever, fuelled by the adrenaline. “007 BC” followed, and by this time the light man began to really have fun: fog machine, different colored lights, twirling spot lights, the whole shebang. After some new and old tunes (“Metal Man,” “Used To Sing,” “Happy Ending”), we unveiled out medley cover of “Symptom of the Universe”/”Buggin’ Out,” followed by the new instrumental, “Collosal Black Hole,” and right around then strobes kicked in, and Dillon and Gabor actually had to focus harder, because the lights had their won rhythm that they had to ignore in order to keep the desired tempo.

I wore the T-shirt my brother had made, wherein he had Good Apples printed below the picture on the cover of a Crvena Jabuka (Red Apple) album, which features a girl’s naked butt with a big red apple painted on her skin. One person in the audience, Dillon’s friend Ankica, actually recognized the reference/rip-off.

For our next show, at The Double Door Dirt Room, we’ll bring Bob Rok back, this time accompanied by Mar. Powers will headline, and D-Nick the Microphone Misfit and Ray of Light will also perform.
Posted by Snezana Zabic at 10:16 AM No comments: