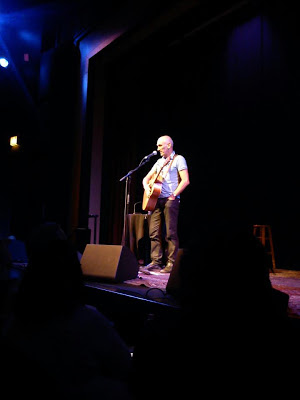 Outside Paul Kelly's native Australia, the mention of this troubadour's name elicits one of two responses among people: 1) "Who?" 2) "I love Paul Kelly." Those of us in the second category know every line of three of his most widely distributed albums: Gossip (1986), Under the Sun (1987) and So Much Water So Close to Home (1989).

On January 17, Paul Kelly appeared on the stage of The Old Town School of Folk Music alone, with an acoustic guitar and a bag of harmonicas. He announced that this was his first live show of the tour in support of Spring and Fall, a cycle of eleven songs released (internationally, unlike his albums between 1989 and now) in November 2012 and that he would try to do the entire album first. The first ten songs chronicle a love affair that lasts less than a year, the eleventh one a coda that shows us the middle-aged narrator-protagonist a few years after the break up, suffering from "little aches and pains." After the three-and-a-half seasons distilled into about forty minutes, Paul sang us a selection of songs from his previous sixteen albums, ignoring, as usual, his first two albums from '81 and '82 that he'd rather everyone forget ever existed. But check out "Alive and Well" from '82. Sure, I'm biased, but that sounds great, and I'm digging the punky look (though I'm glad he discovered food later in life).

As opposed to the charmingly awkward skeletal spaz in the video for "Alive and Well," Paul Kelly is now a veteran comfortable with the fact that he'll forget a chord change and then quickly recover, with a disarming smile, and that an audience member will have to remind him what the opening line of an old song is.

He's never been a guitar hero or "the voice" anyway. And he never forged radical new paths as a songwriter. What he does is pick up select threads from the traditions of pre-recording-technology folk, pre-90s rock, and poetry going back to at least the British Renaissance, and he weaves the tightest yet supplest sonic and poetic bolt of fabric he then uses to fashion new songs and deliver them without pretension or forced eccentricity. That makes his best songs perfect and the rest really really good. They are typically brief, composed of simple open-chord progressions upon which the singer builds stories about characters dealing with relationships, family, hardship and triumphs, enduring and causing pain, sharing joy, the gamut. These stories are mostly set in Australia, and thanks to Paul Kelly I've learned a bit about places, things, and people like Adelaide (fifth largest Aussie city; my geography classes covered maybe only the top four: Sydney, Melbourne, Brisbane, Perth), MCG (Melbourne Cricket Ground), Silver Top (taxi company), the Buttery (rehab center), Vincent Lingiari (freedom fighter).

You'll get each song when you first hear it, that's how transparent the words and music are, how much you can relate to the characters and narratives depicted, and how convincing a conduit Paul Kelly is, but then you'll keep listening to those songs for decades, and never get tired of them. How come? Because every syllable is there for a reason, nothing extra to dangle and distract.

I always thought Spurious Bastard would be a platform for writing not just by yours truly, but friends and collaborators. That never really happened. Until today! I present to you the new contributor to Spurious Bastard, Nick Garcia aka Bob Rok aka Nicky Zabic: 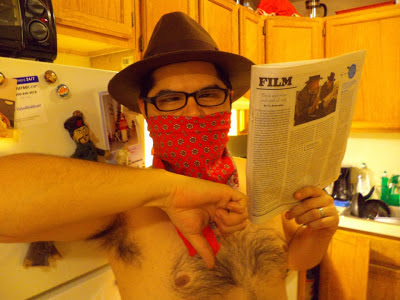 How to Fall in Love with Chicago

Tal Rosenberg, you're fired. I read your review of Quentin Tarantino's newest film “Django Unchained” in The Chicago Reader (1/3/12) and it was as boring and lifeless as the Chipotle you wrote it in on your lunch break. Much like the purpose of getting a journalism degree, you missed the point of the film entirely. Instead you went on a poorly written rant about why you don't like Quentin Tarantino's latest work. Now I shall best you. Why? Because I am the Good Will Hunting of being a smart ass. (And I drank a cappuccino after 6.)

Chicago winter is here and for a lot of us that means a lot more time indoors. Like any Chicagoan, I get whisked away by the home luxuries of internet, television, and bathtub sex, but one must venture outdoors. I decided to ask my wife on a date and we were off.

A couple trains and a nice stroll down Lincoln avenue lead us to the charming Davis theater in Lincoln Square. I call it charming because it's super old and kind of dirty, the seats are bigger than the screen, and the place hasn't changed since I was a child. Other theaters look like deranged manifestations of a crazy person. Why is ice cream in pill form? And why are people so excited about 9 dollar “Hottie Dogger bites”? My point is, this is the theater that Quentin Tarantino wants me to see “Django Unchained” in and while I'm certain he accepts profits from everyone equally, I know what I'm talking about.

The movie begins and I'm a little nervous that film’s violent reputation might be too much for my wife to sit through. After all, before we came here, she suggested we see a French film about a middle-aged man questioning his validity in the world and existence itself.

The film is scored well and the sight of men in chains makes me a little sad. Still, I realize that with every film Tarantino is modernizing genres for a new generation. “Kill Bill”--kung fu, “Inglorious Basterds”--war movies, “Django Unchained”--period piece. Of course a lot of people are gonna go after Tarantino for making a spaghetti western/revenge fantasy full of plot holes. When is the last time you watched a John Wayne western and started asking yourself why the Indians are wearing tan cargo pants? Give me a break. I suppose you'll tell me “Lincoln” (playing in the next theater) was any more accurate. Steven Spielberg hasn't made anything watchable since he stuck his old grey hand up a dinosaur’s ass. He's doing the same thing as Tarantino, which is making the movie he wants to make. The movie is super violent; maybe it's because I haven't been to a movie in a while, but at first it's kind of disturbing. It makes me think about all the shootings that have happened lately and how we shrug off the idea of people just filling one another with bullets all the time. “Django Unchained” is number 2 in the box office, which means a lot of us are going to see it. The thought floats away and I wonder of where I would have been during that time. I'd like to think I would be fighting to abolish slavery in one way or another. I can't imagine America was much more loving towards Mexicans at that time. On the other hand, I might be at a theater with my wife taking in a show and putting it out of my mind altogether. I consider how atrocious of an act slavery was and how people shrug that off too as if it wasn't this nation’s collective history. Slavery exists in many forms today; after all children are not only our future, they are also the makers of our shoes, clothes and toxic electronics. (I'm typing this on one.)

I notice a recurring theme in the film. “Business.” “Flesh for cash”. Two men crossing this nation killing men who profit from enslaving other people. All of them justifying their actions with business and the intention of human will. All the characters are reserved gentlemen or cold-blooded murderers. An important scene it the movie sums it up well. Dr. Schultz and Django are exposed the extremely savage murder of a slave. German Dr. Schultz is visibly disturbed while Django masks his contempt. When asked why he isn't as disturbed as his partner he replies,

“I deal with Americans a lot.”

I think the film is urging America to ask itself: What are we willing to ignore for in the name of business? Who are the polite killers in our society? And when are we gonna gain the nerve to kill our masters? Or at least liberate ourselves?

The movie ends and we stroll down the block to a bookstore where I look for but don't find Stephen Colbert's new book “America Again: Rebecoming the Greatness We Never Weren’t.”

After a little more browsing we find nothing and agree to go eat somewhere in the neighborhood. Trattoria Trullo looks way too nice to walk into with a hoodie I haven't washed since Christmas but we decide to splurge. After rejecting their beer selection and ordering the pasta dish most parents order for their picky children from a curt Italian server, I wondered, Is there an Italian word for “emasculated American who orders meat sauce”? The meal and the conversation were as delicious as the picture of “Christopher Columbus's Shame” I drew on the paper tablecloth. Remember guys, always carry a sharpie. I left a few extra dollars out of guilt and we walked off our hearty meal heading to the Damen bus. On the way we saw a cafe where a friendly hipster whipped up a pretty tasty cappuccino at “Perfect Cup” and while I would never take in music or use drugs with that young man, he made a great drink. I ranted between sips about how corporate companies introduced coffee culture to America, but the small businessman was preserving the quality of the product. I thought about how I might run a business and how doing something I loved by myself in the coming years might be a good way to liberate myself and preserve the quality of something I love.