A snapshot by Dubravka Juraga: 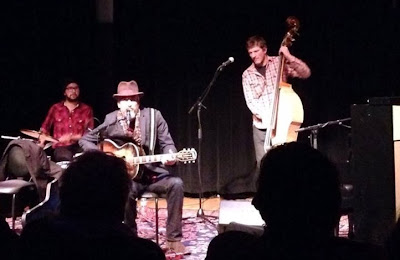 I've seen Howe Gelb live twice now, and I've been listening to his music since the early '90s Giant Sand. The first time I saw him was about 5-6 years back, the second time was last night. Both shows were great, but the energy was different this time. The previous time, he was playing just his guitar, and I think he was backed by a slightly larger band. Last night he played guitar and piano equally and was backed by two guys. He wasn't talking much at all in-between songs 5-6 years ago, as I recall, and no jokes (again, my memory might be failing me). I don't expect musicians to tell stories or jokes in-between songs, not at all. I come to hear their music, everything else is bonus. But what last night made me realize is that it does wonders for the show when a great musician like Howe Gelb switches back and forth between his guitar and his piano, playing older songs and new ones, and then strings it all together with unforced, economic, precise and sometimes funny commentary. He was genuinely calm and at ease this time around, as if everything has fallen into place as completely as possible for him. Maybe it's also that threshold between the middle age and the old age that, in the best-case scenario, brings a kind of calmness. It makes me look forward to my mid-to-late-fifties. (Yeah, I realize that's a very naive and immature thing to say.)

There's much to be admired about the grain of Howe Gelb's voice. His singing is very minimalist, but if you listen carefully, he conveys a lot of different emotions and attitudes with very subtle changes within a song and an album. Add to that the changes that come with time, and you have a wealth of material to study. Or just enjoy. It's not all about dissection and theorizing.

Dinner guests will arrive soon, so I'll have to continue tomorrow.
Posted by Snezana Zabic at 3:47 PM 2 comments: