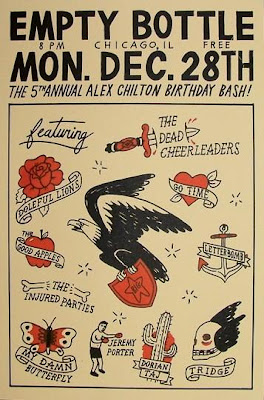 Larry O. Dean of The Injured Parties loves Alex Chilton so much, he throws him a birthday party every year and doesn't even expect that Alex will show up.

The way it goes, Larry invites a bunch of Chicago indie bands, who normally may or may not have Chilton covers in their repertoire, to play Big Star, Box Tops, and the Chilton solo material of their choice, while making sure no song is played twice during the night.

Good Apples and our friend Elliott Conley (of Sewing Machines and Green Grocer) covered "The Ballad of El Goodo," "You Can't Have Me," and "Rock Hard." Elliott stepped out of his comfort zone and sang lead, while playing guitar, for "The Ballad of El Goodo," his first time singing in front of people. Gutsy! We managed to practice with Elliott just a handful of times, but he sounded like a bona fide Good Apple. I sang lead for the other two songs, and Elliott was on saxophone for "You Can't Have Me" and guitar for "Rock Hard." Pete played rhythm and lead guitar with his signature gusto, while Dillon and Gabor held it all together on drums and bass, respectively. Dillon and Gabor are yin and yang of the band, I'm convinced, by which I mean that Dillon is ecstatic and upbeat, all smiles and outgoingness, while Gabor is our brooding genius (with a heart of gold, of course); they complement one another perfectly.

Luckily for us, we appeared as the sixth band that night. By then (10:30) the club was no longer empty and chilly, but almost swinging! It helped that Empty Bottle doesn't charge a cover on Mondays and on top of it offers very reasonable drink specials. The staff is friendly and professional, and the sound is great, especially for a somewhat oddly L-shaped space. The absence of tables and chairs encourages people to mingle, and another nice detail is an abundance of simple coat hooks on the walls, so no one has to carry their heavy winter gear around or be forced to leave it on the floor. It's the simple things.

A lot of our friends came out and even brought their friends, and with them came a genuine birthday bash feeling. Ana came from Massachussetts, her brother Jacob from San Francicso, and her friends from Berlin via Pennsylvania; Nevena came from Belgrade, Serbia; Larisa brought a friend from Sarajevo via Ohio; Elliott's brother Chris came from Peoria, IL; Una brought a friend from New York--okay, they all happened to be in town for the holidays, they didn't come especially for the show, but still.

All the bands were a lot of fun to listen to. Those who stuck out to me are Letterbomb for hitting the right rawk'n'roll note for the night ("Blue Moon" ain't so gentle a ballad anymore), Tridge for demonstrating the solid indie pop-rock indebtedness to Big Star ("Thirteen," anyone?), and Injured Parties for remaking "Holocaust" into an almost power pop tune--who would have though that was possible! It's on their record, check it out if you don't believe me.

I do wonder who went up on stage to play "Thank You Friends" at the very end of the night! Good Apples were in the photo booth next door goofing off with Kristy after Go Time ended (we thought) the night, so we could hear that the song was being played, but we couldn't see by whom. Dorian Taj opened the night with a keyboard-and-voice version of "Thank You Friends," but I wonder who else jammed it. Maybe DJ again, joined by a few others? Or maybe it was a recording?
Posted by Snezana Zabic at 3:35 PM No comments: 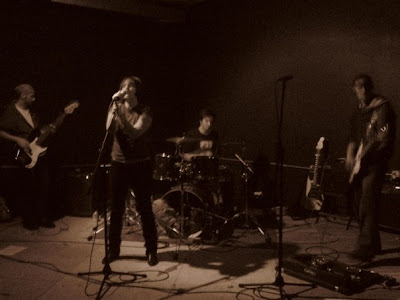 I had never been to Ronny’s before Good Apples played there the witch’s-tit-cold night of December 11. We drove up to the club to unload, and noticed that most of the neon signs were on the blink, but there was a board outside simply stating:

Ronny’s serves dual purpose: it’s a dive bar, with $2 Old Milwaukee cans and a performance space where you can hear loud local bands for a $5 donation.

The bar also smells of something that’s hard to identify, and Gabor’s observation that it smelled like gas (like when the pilot light goes out in my gas oven) is a good description. Incense sticks didn’t help much, but it was a nice attempt.

The garage part of the establishment houses Ronny’s Center for the Performing Arts. The garage is slowly being renovated: instead of cinderblock walls and garage doors you might expect, there are now dark blue panels on the walls, the smell is much less noticeable, and the place is pleasantly warm. The ceiling is full of old water stains, but there were no leaks. The floors are linoleum, and there is no stage—the bands play tucked in the sharp corner where the two panels meet, in a triangle delineated with the PA.

Killer Moon went first. The trio consists of a lead guitarist, a drummer, and a bass player, and delivers hypnotic but energetic instrumental tunes. They have a quiet, reserved demeanor on stage. I was digging the tunes.

The club was slowly filling with our friends, and by 10:50 we were sound checking. I sort-of tuned the Fender Stratocaster Gabor’s sister is letting me play. Next time I’ll tune it better and sound check it for real—gotta respect the instrument. I only played it on one song, with much distortion.

Good Apples opened with "Mt. Killer," the perfect instrumental to open the set. So much energy and adrenaline: what a privilege to play with Dillon, Gabor, and Pete! The first song I sang was “Used to Sing.” The song consists of lines taken from Kathy Acker and then altered to fit the song structure and the story of the song (in my head) which is about disillusionment with love and a mixture of scorn and despair, from the point of view of a member of a megalopolis underclass. The chorus goes: “The Beatles used to sing ‘All You need is love’” and you can guess what the implication is. Personally, I am a Beatlemaniac to death, but it’s fun to assume a persona of someone too jaded for The Fab Four. And it’s a ridiculously arrogant statement on our part to use the platform of Ronny’s Center for the Performing Arts to scorn the Beatles, which only doubles the fun. It’s all in good humor. The Acker text was cut up and rearranged first by Kristy, and then I kept playing around with it until it clicked with the music written by Gabor and Pete.

Other lyrics were written the same way. “Gem” is a cut-paste-and-alter of Guillermo Gómez-Peña and Frank Norris. “Industry”: Helena Maria Viramontes, Sherman Alexie, Acker again, Carol Pateman, and Snezana Zabic (ha! I wrote the chorus all by myself!). “Once Is Enough”: Alexie again, and Hegel. “She Crashed My Car”: Viramontes again, and Hegel again. The exception is “Secret Book of the Dead,” a song for which I wrote the lyrics and the music, albeit using a standard blues/bluegrass chord progression in F sharp.

Our 8-song set clocked in at just under 40 minutes (the above-mentioned tunes, plus "Cannon Box," another instrumental), which felt good. The audience consisting of our friends is only getting to know our tunes, and it seems right not to stretch the limits of their attention span.
Posted by Snezana Zabic at 3:02 PM 3 comments:


Horror cannot be forgotten even if leaders of various parties never take a walk in Vukovar again (that would be awesome, as far as I'm concerned.) Corny or not, this is what I'd like to say (in the spirit of our Sinisa Glavasevic) to those aunties and uncles from the Parliament and other governing bodies, who have their pictures taken in Vukovar once a year: the city--that's us, not you, and we celebrate life, not death. The song "Vukovar" by Brani Je Ispao Pejsmejker was recorded, in that same spirit and in the spirit of fun, before the war.
Posted by Snezana Zabic at 11:26 AM 2 comments:

Free Philosophy Professors! (They're not in jail, I'm just stating that they are free.)

For B/C/S speakers/readers, day-to-day updates on the students taking over Philosophical Faculty in Zagreb are here: Slobodni Filozofski.
Posted by Snezana Zabic at 11:08 AM No comments:

About 300 students are blocking business as usual at the Philosophical Faculty at the Zagreb University today, with a simple demand: that higher education be free of charge. Education is a civil/human right, not privilege or luxury. Today was the first day of the symbolic takeover, and it's a part of the world-wide campaign. Spurious Bastard hears that the students were making a lot of noise and that they are very well organized, vocal, and articulate. Go, students!

I'll post Zagreb news as I get them. What do you hear/see is happening in other places? Nothing at UIC that I can notice :-(.
Posted by Snezana Zabic at 3:11 PM No comments: