It's That Time Of the Year Again

This time last year, I felt angry. Today, just sad and defeated. Time to sing the blues away with The Klezmatics and "An Undoing World"!
Posted by Snezana Zabic at 2:02 PM No comments:

Chad Heltzel picked a perfect venue for a poetry reading: Open Books. This spacious bookstore packed with second-hand books, located near the Chicago Brown Line stop, is a part of a larger organization that provides literacy programs, and Chad had apparently stumbled upon them on his way to the gym one day. Like a lot of literary events in which Chad has been involved, this too had a great turnout, and Open Books helped make it a success by creating and disseminating posters, placing ads, and even getting the event announced on NPR.

It was the Little Red Leaves event, and since the journal is online and its editors scattered around the country, the Chicago reading was one of many designed to promote the journal and its contributors.

Now I wish I wrote this the day after the reading, because, here’s the problem: there were two awesome poets, one opened and one closed the night. Their names? Judith Goldman and Laura Goldstein. I don’t know which face goes with which name anymore. Idiot me.

Also awesome was Brain Mornar, but I am not confusing him with anyone now, almost a week later, because he was the only man reading, plus the remaining two poets featured were Ixta Menchaca Rosa and Tasha Fouts Marren, my UIC buddies. I was coming back from a great Good Apples practice, in a good mood. After I realized that most of the poems I picked for the night had an element of humor in it, I decided to try to play it up by my delivery. It worked! My fave that night—yes, I’m being biased, but I don’t think it’s only my love for the girl—Tasha Marren. Her poems deal manly with fear and language. In equal measures: language is not used to depict only fear, but also itself, until one theme embodies the other. And this is not just an interpretation, my reading of what goes on in her poems; it’s what the poet intends, and then executes masterfully. Kudos! (Tasha didn’t want anyone to review the reading, and I didn’t even mean to, but what the hell, she’s not the boss of me.)
Posted by Snezana Zabic at 1:59 PM No comments: 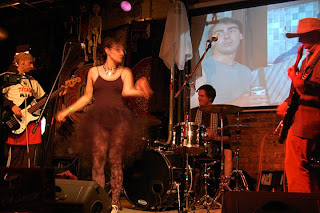 So, in the previous episode, Good Apples are asked to quit playing due to the corporate types complaining that they can’t hear the sound of their voices that they enjoy so much while discussing whatever it is they’re discussing over overpriced beverages in obnoxious sports bars.

In this episode, Good Apples are asked to host a Halloween costume contest and then play a set to close the festivities that include a comedian and a burlesque performance in the intimate confines of Reggie’s Music Joint, a rock’n’roll bar just south of the Loop. Sounds like good old Halloween-oriented fun?

In reality, it was a Pabst-Corporation-oriented promotional event. Everything else--the comedy, the burlesque, costume contest, the music—was just backdrop that can allow Pabst to peddle their product under the guise of “edgyness.” A familiar scenario.

Since we were all there in service of Pabst, obviously any changes that had to be made on the spot wee made without any consideration for the performers. Long story short, the costume contest, along with the majority of the crowd at Reggie’s Music Joint were moved last minute to the venue next door, the main Reggie’s stage. I don’t know who ended up hosting the event, who ended up winning, when the contest ended, whether people knew there was a free late-night show next door, all I know is we played after midnight to a few friendly faces, by the bar and scattered around the mainly empty room, some friends, some strangers. I know the promoters were simply doing their job, and their job is to please the sponsor while keeping the audiences as happy as possible. They might have gotten into the business due to their enthusiasm for music and performance, and I certainly appreciate Elle getting back to Good Apples quickly after we first inquired about playing at Reggie’s, and it felt good that she was full of confidence that we would rock, simply based on what she heard on Myspace. But the reality is that bars are in the business of selling booze, and everything else is little more than décor.

But the décor had a good time after all. Johnny the soundman was awesome (as was our waitress, whose name I don’t know, sorry, honey—the one with a bob hairdo). Chill and friendly, he helped us set up, and stayed alert at his post during our entire set, doing the job he obviously loves and knows how to do. Dillon played under the influence of Dayquil and triple-digit fever, which explained his lack of costume, but he still played as if he was completely healthy. Gabor rocked as The Tecate Man, Pete as Colonel Mustard, and I was wearing the tutu I made myself. It looked ripped up, which is perfect for the undead ballerina look I was going for.

The set was: Mountain Killer (new version, with lyrics), Epic, Happy Ending (my Theremin debut), 007 BC, Dead Already, Used to Sing, Industry, Metal Man, Cosmonaut, She Crashed My Car, and Spectacle. It was the biggest stage we’ve played on so far, with ample space for me to jump and dance, something that’s hard to resist when Good Apples play. The relatively well-lit bar allowed me to make out happy faces enjoying them some Apples for the first time. No hecklers this time, only love.
Posted by Snezana Zabic at 6:52 PM No comments: