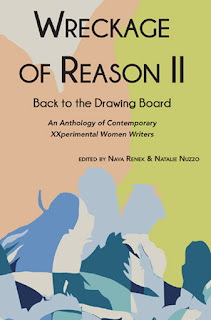 After the anthology Wreckage of Reason II: Back to the Drawing Board came out in 2014, my fellow contributor Andrea Scrima, a Berlin-based US author and fine artist, asked Margarita Meklina, then-San-Francisco-based (now Ireland-based) Russian-American author, and me, a Chicago-based Yugo-American author, to engage in a conversation about what it means to write and experiment between languages, cultures, and geographies. We e-mailed back and forth for a while, and then edited the conversation into "Parataxis and Ponzi Schemes," recently published in The Brooklyn Rail. Here's a quote; click on it to read the whole thing:

Meklina: This is what the world is becoming now: all the artists I love are cross-cultural. They cross boundaries; they test limits. As for me, I’m part Jewish and part Russian, so for many of my relatives on my father’s side, Russian was a second language during the 19th and early 20th century, when they lived in a shtetl. Their first language was Yiddish! When I was young, I made mistakes in Russian, either due to my genes or the fact that I preferred to read rather than watch TV. I didn’t accent the words correctly; I still make these mistakes. And so my somewhat dubious position was determined by my biography: Russian people did not appreciate me being Jewish, and Jewish people didn’t consider me a Halachic Jew. This sense of being torn between my mother’s and father’s blood made me feel cautious and even hurt by both sides, and so coming to the US, where no one knew the difference between Russian, Ukrainian, or Jewish Russian, was a way to break free from all this and become who I wanted to be: a cosmopolitan.

Žabić: Margarita, you make me smile; I can imagine us being pen pals when we were little, fancying ourselves cosmopolitan intellectuals.

When it comes to immersion in American culture, I, like you, find I’m less alienated and more liberated by the fact that even some of my closest friends don’t really know very much about where I come from. They’ll ask me, I’ll tell them, but they’ll forget by the time they see me again. And since the US maintains such hegemony, no American I know finds it objectionable that I moved here and that I write in English.

Posted by Snezana Zabic at 2:25 PM No comments: