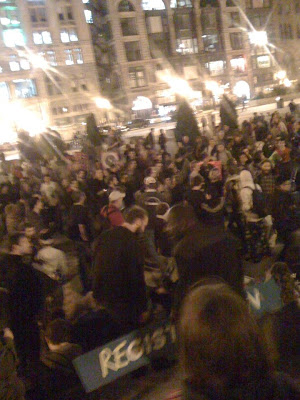 Rubber soles stay intact, leather exterior holds together, but my shoes tear from the inside. The skin on the back of my heels feels it first: torn pieces of fabric lining the shoe rub against the socks, socks against skin. November 2, 2011, 4 pm, I retire the red Mary-Jane flats after six months of heavy use. I slip into new ankle boots, take the train to Jackson Blue line stop, and soon I test the new boots for three full hours of standing and walking, standing, and walking, Board of Exchange, Daley Plaza, Grant Park.

Happy feet, straight back, voice I self-trained in dingy rehearsal spaces holds up to the crowd’s chants and human mic duties.

Another November, only fifteen years ago, in the middle of another continent, I do this every day. I stand with the crowd every noon on the plaza by the Philosophical Faculty, Belgrade University. And then we walk, each time a different route, closing traffic, making noise. A truck with a sound system blasts Prodigy’s “Fire Starter” and other aggressive techno tunes, drummers drum along. No classes since early October. Instead of getting a Master’s in Literature, I’m a part of praxis in popular uprising. Every day there’s dozens of us. Until one day arrests and beatings begin. Then there’s hundreds of us. The cops rape a male student with a baton up his ass while torturing him at the station. Then there’s thousands of us. One day the organizers decide we’re walking from Old Belgrade, crossing the bridge over the Sava to New Belgrade, and on to Zemun, the western end of the city. The only traffic that day will be our feet.

My feet begin to lose grip of the asphalt somewhere in the middle of the bridge. I hold on to a friend next to me, thinking, I’m just a little hungry and thirsty, this dizziness will go away. But it’s not that temporary dizziness that accompanies hunger (aka being high on skip-a-meal), it’s as if the bridge is swaying under me. My friends around me feel the same. Then word comes: we gotta march across. Drummers drum a marching beat, and we all begin walking in the exact same rhythm. It turns out, people aren’t supposed to walk across a bridge any which way: if each person’s gait is in a different rhythm, the bridge begins to sway as if a giant hypnotist is dangling it over the river. Then the walkers on the bridge begin to stagger, and the bridge sways even more. That’s why any protest needs mathematicians and engineers. They quickly figure out what is happening and spread the word. We have to go in groups, and we have to march at a set rhythm: the same way infantries have been crossing bridges ever since the first military was formed. The bridge calms down and we make it to Zemun. At some point, a math student tries to compose a chant in English about how his feet hurt, but he’s gonna keep marching for freedom.

His chant comes out as: “My feet hurt me, but I walk for free.”

The bus lugs west from the six-legged intersection
of North/Damen/Milwaukee and this land my land your land
starts to unpeel. That’s what spring is for,
land is just skin, a face, and some kinds of hunger
suspended along the north/south axis can’t be satisfied
easily. I’m a bad mother and my bratty bastards claw

at each piece of exposed earth with their fingers
stained and sticky with melted popsicle.
There can’t be a regime they and I can’t topple,
with or without “[favorite deity] is my homeboy”
earnestness printed on T-shirts,
as the Currency Exchange neon sign conspires
with the solar wind to reverse Humboldt Park’s

magnetic field flow. “Don’t walk” blinks, so I know it’s
Kimball and Homan. The stick figure man turns from
red to green. So it’s a traffic light in Novi Beograd,
North Avenue parallels the Danube,
the bus may take us to Narragansett, might take us to Zemun