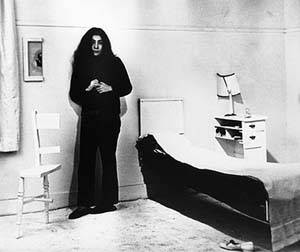 While I'm caffeinated and compelled to blog, let me note this. The Žabić family had the first Plastic Ono Band single, "Give Peace a Chance" on A side and "Remember Love" on B side. I could understand one level of those songs when I was in kindergarten, and I still appreciate them now that I understand more (I'm in 27th grade now, if my calculations are correct).

The way I see it, Yoko was at first a non-musician but nevertheless a true artist who got to write and record a lot of songs, with the help of, in her and their heyday, some great musician friends. During that experience she definitely became a musician, albeit non-conventional. It doesn't matter that she didn't rock an instrument (though I suppose she took mandatory music lessons as a young girl, given her blue-blood background) and didn't sing like a powerhouse rock chick. Yes, she liked to make strange sounds with her voice. We all do it all the time, but most of us are too scared to shit to call it music. All of that only made her stand apart from everyone else, and made me appreciate her when I was a small child and obviously I keep appreciating her.

Another thing that gets overlooked is that while most rock and folk chicks of her generation, as well as those younger than her, distanced themselves from the feminist movement (even while they embodied feminism perhaps more than Yoko did privately, take Joni Mitchell or Patti Smith for example, but that's a long story), she embraced sisterhood and wrote bad-ass feminist songs. It's complicated. She was probably oblivious to the fact that her open feminism would only alienate people more. Of course, she didn't have to worry about bringing food to the table etc., etc., but whatever.

I guess I'm trying to say that I understand her impulses. I wish there were more people who approach music and songwriting intuitively, and don't care about being either rock or folk or experimental, but who get a chance to break out of their bedrooms, who get support from open-minded but more conventional musicians to get their music heard widely (and hated more than loved, but people are crazy and don't know anything), because judging from Yoko Ono's career, the results are outstanding.

Too bad nowadays she's surrounded by super-rich hipsters who can't hold a candle either to her or the people she hung out in her heyday. (No offense, Yoko. Damn it, I hope she or her loved ones don't read this. I hate it when bloggers are mean like I am now, as if they don't know they're publishing their mean thoughts for the whole world to potentially read and for strangers' feelings to get unnecessarily hurt. Yoko, if you are reading this, who cares what I think, I'm sure your young super-rich hipster friends and son are wonderful, and I'm just jealous they get to play with you and I don't, plus you don't want me to play with you, my guitar playing is pathetic.) But that's okay.

Plus, it doesn't matter that Yoko's hipsters are super-rich, that's not the point. Why do I even keep bringing the wealth up? (I'm being such a stereotypical blogger-ranter here, totally not my blog persona normally. It's the coffee talking.) I mean, Yoko grew up and stayed super-rich too, but I guess the difference is that she wasn't spoiled like some kids get spoiled nowadays (not Sean, he really seems like a nice guy, from what I can tell from interviews with him I saw on Youtube, and I mean it). In any case, I understand that Yoko's parents were super strict by today's standards. Which makes me think: dear Spurious Bastard readers, if you are wealthy and you have kids and you'd like them to become great artists, for godsake be as strict as an early-20th-century Japanese aristocrat banker.

Thank you for reading this rant. I love these and other songs:

Oh Snezanastan...I love the fits and spurts of your caffeinated brain. Love, Ceci.