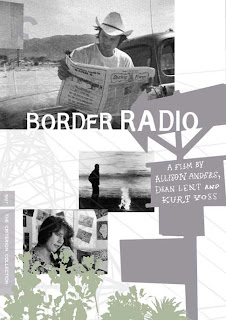 Which border? California-Baja California. Which Radio? Fictional. Made over a course of four years (1984-88), Border Radio began as a student film by three writers/directors/cinematographers with limited skills and no budget, and magically the final result is a compelling mix of mainly two genres I've never seen combined before: noir and rock mockumentary. Both genres emerge out of the loose plot concerning the two protagonists played by Chris D. and Luanna Anders. Chris D. plays a leader of an underground rock band on the verge of commercial success. Luanna Anders plays an aspiring author with origins in punk zine writing. The two of them are married with a child. He escapes to Mexico, the band disintegrates, she tries to bring him back, and thankfully their neglected kid is really well-behaved and quite happy nonetheless. There is an issue of money stolen from a club, and of some mysterious "books," band members beaten up by some thugs, the ridiculous roadie successfully hitting on Luanna, and all of it is interspersed with fragments of interviews with all the characters in the movie, given to reporters (who never appear on the screen) apparently working on a story about Chris. The movie is black-and-white, beautiful to watch even on my computer screen. Though I'd known and loved the music in the movie before--The Flesh Eaters, Green on Red, Dave Alvin, that's why I rented it--I really didn't expect the movie to be great. My expectations were low simply because the makers of the movie never really made careers as auteurs after that movie. Now it's a puzzle to me: how come not even one of the 3 makers of such a layered, funny, haunting film, which was released in art theaters in 1988, didn't go on to become brilliant art film makers? (Allison Anders is the successful one of the three, but her output varies from likable Grace of My Heart through the Madonna part of the Four Room omnibus, to HBO gigs like directing Sex and the City episodes. Not exactly Fellini.)

My instinct is that the answer lies in that same cultural neglect that relegated all the best kinds of music to (near) obscurity back in the ReaganBushSr. era. (Or so I hear, I didn't live in this country then.) And if that happened to rock music, which costs much less to produce and distribute (if done right), of course film had an even worse faith being so much more expensive to make. In other words, good underground music exists in obscurity, but it exists, whereas what passes for indie film usually is very unpersuasive and forgettable. (The exception was/is Jim Jarmusch, but that guy always had one financial foot in Europe, right?) Maybe digital, DIY films of today and tomorrow will not suck, because they can entirely surpass the film industry and even theaters...
Posted by Snezana Zabic at 9:37 PM

Mmmm sounds good ! Will see if I can download it.